Three volunteers met with SFCT staff to assess and address erosion from recent rainfalls on the lower parts of the Atalaya Trail, which SFCT has adopted in agreement with Santa Fe National Forest.  Starting at the  “trailhead” at the Camino de Cruz Blanca cul-de-sac, the group of five worked up to and past the Dale Ball Trails junction (Talaya Open Space) to clear filled-in areas where water could drain off of the trail in the future. 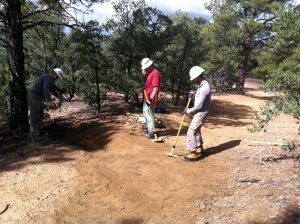 Built to last. It is hard to get water off this part of the trail but the current pattern of repeated small ditches and banks is neither sustainable nor particularly desirable.

These bump and drain structures are part of a repeating pattern of trail tread seguing into drainages, with new trail tread forming along side, leading to another “drain” in 40-50 feet.  This requires continuous maintenance and may cause inconvenience to trail users, particularly mountain bikers, where the “bump” extends into the trail tread. 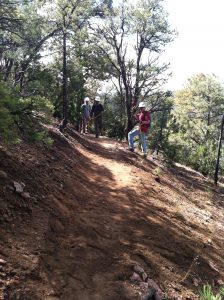 Better tread through “de-sloughing,” which is essentially refreshing the bench cut into the hillside by taking a little off the top.

The crew worked to build one large grade reversal that would not disappear, to clear any flow in the tread off of the trail completely.  It is critical to make sure that the leading and trailing edges of any structure like this are not too abrupt for trail users.  Although this is a very challenging trail to work on, in general we need to focus on more subtractive techniques – de-berming, nicks, and grade dips – that are emphasized in trail maintenance guidance. 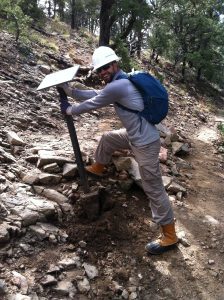 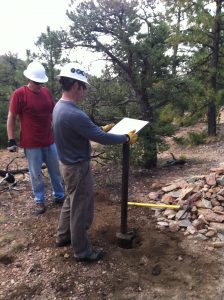 Much better – the junction of Atalaya Trail with the lesser known trail to “Shirley’s Knob.”

The crew continued up the trail to the TPL’s “Atalaya Overlook” sign which had been placed and oriented in a trail junction in such a way as to be hazardous to descending trail users.  Much of the concrete base of the sign was already exposed, and so with little effort the sign was removed and re-inserted at a more amenable location about 200 ft. to the south. 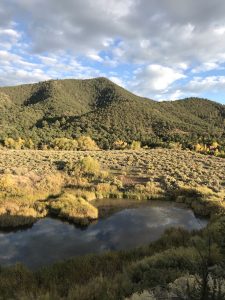