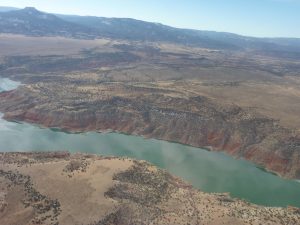 Bounded by the San Juan and Jemez mountain ranges, Rio Chama flows through the Piedra Lumbre Valley to Abiquiu Reservoir, one of the great water resources of New Mexico. The 5,200-acre lake forms behind the earth-filled Abiquiu Dam, before the Rio Chama, continues on its way through the town of Abiquiu and finally joining with the Rio Grande at Ohkay Owingeh 28 miles to the south. The reservoir is a keystone of New Mexico’s recreational pastimes, with outdoor enthusiasts engaging in camping, hiking, swimming, boating, and fishing along the 12-mile lake. Pedernal and the sublime red sandstone landscape of the Abiquiu area, inspired the work of the internationally acclaimed artist, Georgia O’Keefe.

The Piedra Lumbre Valley with its verdant grasslands, mesa, and mountain-fed streams and rich and rugged physiographic and ecological settings, has sustained 10,000 years of human presence. Early Paleoindian hunters followed waning herds of Pleistocene megafauna, bison and mammoth. For 7,000 years, a dryer and more temperate climate expanded woodlands and grasslands where Archaic hunter-gatherer family bands lived in seasonal camps on low, shelter rises above the Rio Chama and its tributaries. Ancestral Puebloan farmers moved into their former hunting territories and travel routes in the early 1100s establishing small puddled adobe hamlets. By the 1300s, small villages grew into large villages, exemplified by Tsiping, an 800-1200 masonry room village sited high above the historic village of Cañones. It overlooked the Piedra Lumbre valley to the north while marking the northern entrance to the emerging Tewa world. Settlement retraction in the middle 1400s concentrated populations in the ancestral Tewa villages to the south, leaving the Piedra Lumbre Valley open to the movement of ancestral bands of Ute, Navajo, and Apache tribes into the area. Mobile bands camped in sheltered settings along the Rio Chama and its territories into the middle-nineteenth century.

The Piedra Lumbre Valley attracted early Spanish hunters and traders with the first village of 20 hardy families established near Abiquiu in the 1740s. Severe hardships due to the remote location and periodic raiding by Comanches and Utes decimated the settlement, which was re-established by mixed Genizaro (detribalized and Christianized Native Americans) and Spanish settlers at modern-day Abiquiu in 1754. During this same period and continuing into the early nineteenth century, numerous land grants were conveyed to families and communities in the Piedra Lumbre Valley. Remote ranches intermittently occupied at first, as the population in the Abiquiu area grew, these large agro-pastoral grants were joined by community grants with Cañones established in 1808. Beset by raiding, these communities maintained a tenuous hold on the land and their agro-pastoral lifeways.

Confirmed by the Court of Private Land Claims and patented in 1902, the Piedra Lumbre Grant encompasses 49,748 acres in the heart of the SFCT focal area. With exception of Abiquiu Dam and Reservoir, the Piedra Lumbre Valley looks much as it did 300 years ago. Predominant ownership and land use pattern of large ranches with minimal development preserve a rich cultural heritage, natural setting of ecological and geological diversity, and landscape of awe-inspiring beauty.