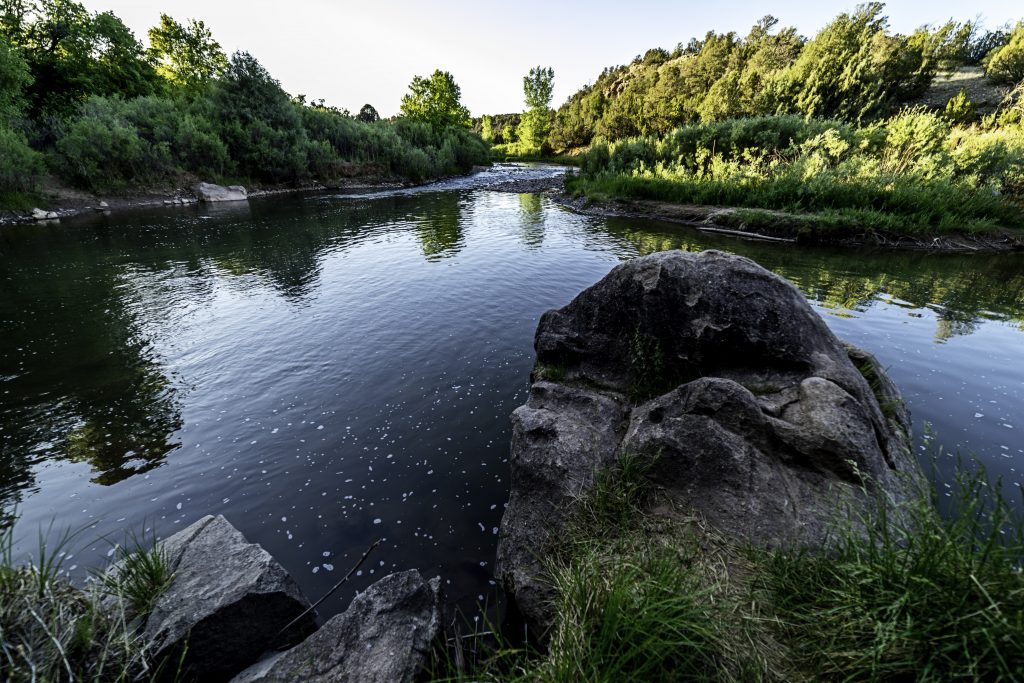 Description & History
Running down from the western slopes of the Sangre de Cristo Mountains, the Pecos River travels 926 miles before meeting up with the Rio Grande on the southern border of Texas. Situated between Santa Fe and Las Vegas, the village of Pecos and the headwaters of the Pecos River lead to the Glorieta Pass, which has been utilized for centuries, by Pueblo and Plains Indians, Spanish settlers and traders, and U. S. military and travelers. The Santa Fe Trail, Route 66, and now I-25 have all passed through Glorieta and Pecos on their way west. For hundreds of years, the wild and scenic Pecos headwaters has greeted travelers on their way into the “Wild West.”

The Pecos Valley has presumably been occupied, at least occasionally, by humans for at least 12,000 years. It was first used seasonally by hunters and gatherers, with more permanent settlements increasing over time. The first permanent settlements in the area seem to have begun around 750 AD. Pecos Pueblo became the largest settlement for the previously dispersed farmers of the Pecos Valley around 1450 AD, although there was a pueblo near modern Rowe, as well. Pecos Pueblo thrived as a village and principal trading center on a major travel and trade route from Glorieta Pass to the Great Plains, well before the arrival of European settlers.

Pecos Pueblo was a thriving village reportedly housing 2,000 “souls” when visited by the expedition of Francisco de Coronado in 1540. The site of a major Spanish mission and church, the pueblo was left by its Towa-speaking residents in 1838, following a century of Comanche raiding, dramatic population decline, and loss of land to Spanish and Mexican settlement expansion. Ruins of the pueblo village and Spanish mission are preserved today at Pecos National Historic Park.

A contested and dangerous corridor of movement between the settled lands of the Rio Grande and Pecos River and the Great Plains, Hispanic settlers did not permanently reside in the area until the end of the eighteenth and early nineteenth century. Following the conveyance of several land grants downstream from Pecos Pueblo, small villages along the Pecos River and its tributaries, including Rito del la Vaca (Cow Creek) proliferated. San Miguel del Vado and its namesake grant was the largest community through which commerce with Plains Indians and the burgeoning Santa Fe Trail trade was filtered and administered until 1846. San Miguel del Vado and Los Trigos grants encompassed over 300,000 acres of pasture, forest, and watershed that sustained Hispanic villages and ranches into the twentieth-century. By 1831, an extensive system of irrigation ditches had been constructed along the Pecos River and its tributaries to serve the communities of Upper and Lower Colonias, North and South Ysidro, and El Macho, among others.

The opening of the Santa Fe Trail, followed by the end of the Mexican-American War in 1848 introduced Anglo-American political, economic, and cultural influences to the Pecos River Valley. As in other parts of Northern New Mexico, speculation in land and natural resources threatened traditional communities and lifeways. In 1862, the Battle of Glorieta Pass was fought between the Union and Confederate armies during the Civil War. The battle, which determined the fate of the western territories in favor of the Union, is interpreted by many historians as a major turning point in the war.

The building of the Santa Fe, Atchison, and Topeka Railroad through the Upper Pecos River valley in 1879 combined with the loss of lands through purchase and legal actions signaled a decline in the Hispanic agro-pastoral lifeways. In the twentieth century, grazing and farmlands lost to the Public Domain and reclaimed through the Homestead Act, were sold and reconstituted as Anglo-American-owned cattle ranches. These ranches included the famed Forked Lightning holdings owned by Colonel E. E. “Buddy” Fogelson and his actress wife, Greer Garson. Into the 1970s, the storied Forked Lightning Ranch and its neighbors were divided into smaller ranches more attractive to modern ranchers and landowners. The private holdings, traditional villages, and public lands of the Pecos River Valley constitute a remarkable multicultural heritage and diverse riverine, mesa, and mountain landscapes.

Gold and silver ore were discovered by other prospectors later in the 19th and early 20th centuries, but large-scale mining did not begin until 1926 or 1927 when the American Metals Company opened the Tererro Mine. Ore was transported down-canyon on an aerial tramway to the “El Molino” site on Alamitos Creek near the Town of Pecos for milling and concentration. At the peak of operations in the 1930s, Tererro had a population of over 3,000 people, and the mine was New Mexico’s largest single employer. Mining operations continued until 1939. Many of the roads, bridges, and campgrounds that still exist along the mainstem of Pecos Canyon were built or improved during the 1930s by the Civilian Conservation Corps to support the mining operations and nascent recreation industry.