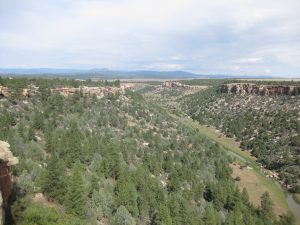 Description & History
The physical setting of Las Vegas has always made it a desirable and practical location for inhabitants. As far back as 10,000 years, people took advantage of the natural resources of the Sangre de Cristo Mountains and the meadows of the Las Vegas Plateau for sustenance and livelihood. During the years 1100 to 1400 AD, Pueblo and Plains Native Americans used the mountain passes northwest and southwest of the city as trade routes. Las Vegas was an ideal camping and trading location and its proximity to a perennial water source in the Gallinas River foreshadowed permanent settlements. The presence of water meant that agriculture was marginally possible, and a review of the archaeological record bears this out with area excavations uncovering remnants of corn, beans, manos, and metates.

At the outset of the U.S-Mexican war in 1846 the US Army established its military headquarters in Las Vegas. Settlers traveling on the Santa Fe Trail were already familiar with the region and its strategic location and natural resources. The Santa Fe Trail established trade between the eastern United States and New Mexico in the early to mid-1800s.

The town had a second birth when the Atchison, Topeka & Santa Fe Railroad came through in 1879, and a second town center, this time east of the Gallinas, was set up around the railroad station. Las Vegas became an exceptionally opulent trading post in its heyday, and became a melting pot of the different cultures traveling across the U.S., as well as a stunning collection of revivalist architecture of different places and periods. It suffered a major setback in 1905 when a new rail line was built in New Mexico between the towns of Clovis and Belen, cutting off Las Vegas in the north.

In 1926, Route 66 was aligned along the Ozark Trail south of Romeroville (right next to Las Vegas) and west, along the Santa Fe Trail. Route 85 also followed the Santa Fe Trail and headed north through Las Vegas. It was an important town for those travelling the Mother Road between Santa Fe and Santa Rosa, offering a wide variety of services to the motorists. But in 1937 US 66 was realigned further south, when the “Santa Fe cut-off” shortened the road.

Hermits Peak
Named for the Italian religious recluse Giovanni Maria de Agostini, Hermit’s Peak is surrounded in lore. He had traveled from Council Grove with a Santa Fe Trail caravan. Legend has it that Giovanni carved out a small cave on a narrow ledge and lived there from 1863 to 1866. The cave was so low Giovanni could never stand up, and to protect himself from the elements (and the sheer drop below) he built a rock wall around the mouth of the cave.

Romeroville
Established by Trinidad Romero a representative in the Territorial House of Representatives and a congressman from 1877 to 1879 coincided with the arrival of the railroad just southwest of Las Vegas. The station was named after him (without the “ville” part), and it was a humble place described in a 1915 description by the USGS of the area as “Romero (ro-may’ro) 6,287 ft. 791 mi. from Kansas City. A siding.” Romero built a two-story adobe mansion which later became a hospital and finally a “dude ranch” which burned to the ground in 1932. The adjacent barn is still present today on one of the Santa Fe Conservation Trust conservation easements.