Santa Fe, the capital of New Mexico, is located in the north-central portion of the state at the foothills of the Sangre de Cristo Mountains. Its elevation is approximately 7,000 feet above sea level. Founded by Don Pedro de Peralta over 400 years ago, Santa Fe is the oldest capital in the United States. It has attracted a huge cross-section of different cultures and ethnicities; it is the third-largest art market in the United States with approximately 250 galleries, attracting art collectors worldwide.

Our conservation efforts in the Santa Fe area have focused on its distinctive landmarks in the foothills of the Sangre de Cristo Mountains. Visible from miles away and from Santa Fe at its feet, this land is part of the distinctive series of mountains that define Santa Fe’s eastern skyline and lend immeasurably to the natural beauty of the community. Used by generations of Santa Feans for stock grazing, timbering, and access to the National Forest and for hiking to Atalaya Peak, the land is now facing another kind of human encroachment: road and home-building. Though placing easements cannot stop all development outside of its boundaries, it can help create a buffer zone that sets a precedent for community conscience that values natural beauty and land preservation, for generations of Santa Feans to come. Among the landmark hills that the Santa Fe Conservation Trust has helped protect are Atalaya, Sun Mountain, Sallie’s Hill, and Cerro Gordo. 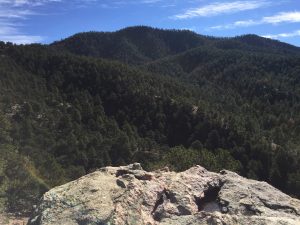 The earliest evidence of human occupation within the corporate limits of modern Santa Fe date back to the sixth millennium B.C. For 5,000 years hunter-gatherers roamed the landscape leaving ephemeral remains of their temporary seasonal campsites. Ancestral Puebloan farmers established small settlements along the Santa Fe River and the terraces northeast of the city by the 1000s. Initial settlement of the Santa Fe River and tributaries expanded through local population growth and migration into large adobe villages in downtown Santa Fe at Ogapoge, downstream and Pindi, Agua Fria Schoolhouse, and Cieneguilla pueblos, and to the south at Arroyo Hondo Pueblo early in the 1300s. Subjected to drought, floods, and a depleted environment, all the villages by Cieneguilla Pueblo were depopulated by 1420. Cieneguilla Pueblo, located 16 miles downstream from Santa Fe remained active until the Pueblo rebellion against the Spanish in 1680.

Initial probes into the New Mexico area by Spanish explorers, including Francisco Coronado, beginning in the first half of the 16th century led to the colonizing expedition of Don Juan de Oñate in 1598. After eleven difficult years, Don Pedro de Peralta settled Santa Fe officially naming it the capital of the new colony in 1610. While settling the far northern colony, the Spanish government and church subjected the Pueblo population to a harsh and repressive regime of economic and religious oppression. In 1680, members of many pueblos and their allies in a revolt reputedly organized and led by Popé and Naranjo ousted the Spanish colonists from Santa Fe and New Mexico. Spanish rule was reestablished by Don Diego DeVargas in 1693, by a systematic campaign of subjugation and submission that established a peace treaty between Spain and the Pueblos. This event is commemorated annually during the Fiestas de Santa Fe.

New Mexico continued to be a Spanish colony until the Mexican Revolution of 1821. Trade between Mexico and New Mexico flourished, along El Camino Real de Tierra Adentro, which connected Santa Fe and Chihuahua, Mexico. During the Mexican American War, 1846-1848, Santa Fe surrendered to the U.S. Army, and New Mexico became a U.S. territory. During this time, the Santa Fe Trail was established, connecting Santa Fe to St. Louis, Missouri. This was to be the first highway into the West, bringing thousands of pioneers, settlers, and tradesmen from the eastern U.S. to Santa Fe and the surrounding area. New Mexico remained a territory until achieving statehood in 1912. 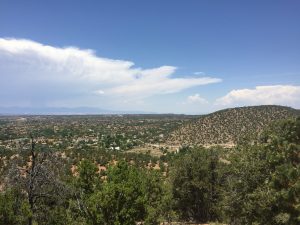 Santa Fe itself received several blows to its commerce, industry, and economy over the coming years. Between 1878 and 1880, the railroad built to connect the East and the West bypassed Santa Fe, removing it from its status as a trade hub. Again in 1926, Route 66 came through New Mexico, but went to Albuquerque instead of Santa Fe, condemning it to a back-road locale. Legislature passed in 1889 placed the future University of New Mexico in Albuquerque as well. These events caused a rift and a 50-year rivalry between Santa Fe and Albuquerque. In response to economic pressures, Santa Fe began billing itself as tourist and health destination, as well as pioneering what would be called the “Pueblo Revival” style of architecture that has made Santa Fe so distinctive. Distinctive architecture and an emphasis on arts and culture have to Santa Fe becoming a haven for artists and galleries, trends that still continue today.

Municipal ordinances and efforts of the art and historic preservation community to preserve Santa Fe’s cultural heritage in the 1920s and 1930s and 1980s have made it a desirable location for second residences and professional people who supply services to the national markets. Rapid growth in the 1970s and dependence on government employment and the need for hospitality services support blue-collar and lower-economic classes that contrast with wealthy permanent and part-time residents. Today, Santa Fe is the centerpiece of a tourism industry that brings more than $1 billion into the state every year. The outdoor recreation economy is growing fast with the local open space and trails that the Santa Fe Conservation Trust helped create.