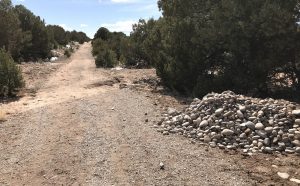 The first city trail work day in 2019 focused on erosion control along the “Wide Trail” between Frijoles and La Cuchara Trailheads in La Tierra Trails.  Over a dozen students from The Masters Program joined additional “crew leader” volunteers organized by the City’s Keep Santa Fe Beautiful coordinator, Carol Branch.  Rock was provided ahead of time and during the work day by the City Parks Division.  Other dates scheduled in February and later in March had to be cancelled due to snow and cold temperatures. 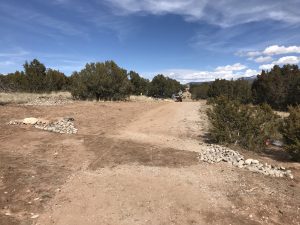 Another eroding problem spot near the Frijoles Trailhead, now with an improved “grade reversal” and check dams to deflect and slow down storm water 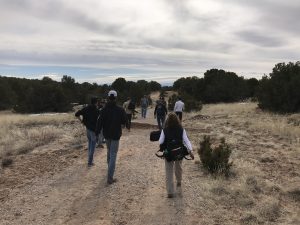 Carol Branch, TMP volunteers, and KSFB crew leaders call it a day on the Wide Trail